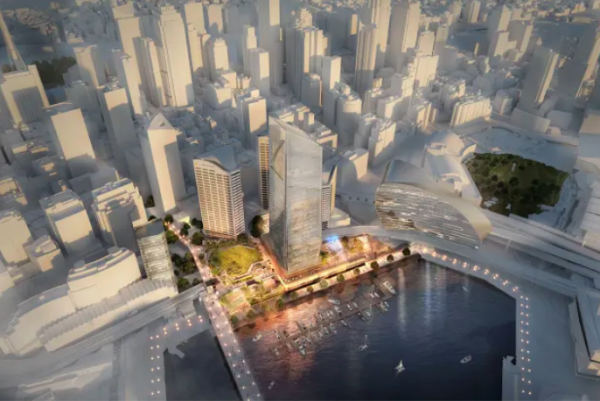 $649 million redevelopment in Sydney’s Cockle Bay, announced more than three years ago but left up in the air due to overshadowing concerns, has been given the green light by the state’s independent planning commission.

A $649 million redevelopment in Sydney’s Cockle Bay, announced more than three years ago but left up in the air due to overshadowing concerns, has been given the green light by the state’s independent planning commission.

But the consortium had to revise its design proposal several times in response to concerns from residents and the City of Sydney council that the tower would overshadow a future town hall square in the CBD as well as private homes nearby.

The NSW Independent Planning Commission on Monday announced it had approved the project, which includes retail, bars and restaurants, as well as a commercial office tower which has a maximum allowed height of 183 metres.

The commissioners who made the final decision cited the benefits of increased public amenity, which included replacing the existing pedestrian bridges over the Western Distributor with a hectare of open public space and upgrading the third footbridge.

“It will make a valuable contribution to the area through creating active and passive open spaces, landscaping, enhancement of the Darling Harbour foreshore,” the commission stated.

The commission said in relation to the City of Sydney’s concerns, overshadowing of the future town hall square would be limited to a maximum of half an hour on two days of the year between 4pm and 4:30pm, which “would be outside of the time that the space will experience peak utilisation, such as lunch-time hours.”

City of Sydney Lord Mayor Clover Moore said she was appalled by the decision and has called on the newly-appointed minister for planning and public space to intervene in the detailed stage two of the development application.

“Now the commission risks setting a shocking precedent by approving a development that will overshadow the square, at a time when workers and visitors to our city could be gathering in a beautiful public space, enjoying the final hours of afternoon sunlight.”

The next stage of the development approval process will involve an international design competition.

Development consortium spokesman Matthew Faddy said the investor group was delighted to move to the next step of the planning process.

“We welcome an opportunity to progress different ideas and to hear further from the community as we consider the designs that are possible for this site,” he said.

“Cockle Bay Park presents a unique opportunity to cover the Western Distributor and remove the barrier that divides the city from Darling Harbour.”