ACT investment up with light rail, but expected to slow next year

ACT investment up with light rail, but expected to slow next year

ACT government investment in infrastructure projects has risen 10 per cent in the past year, largely due to the stage one light rail project, but it is expected to slow next year, as work on the project ends.

The June quarterly Deloitte investment monitor shows the value of territory government investment has risen 10.2 per cent from the June quarter last year, though it is down 5.3 per cent compared to March this year, from $4.4 billion to $4.1 billion at the end of June. 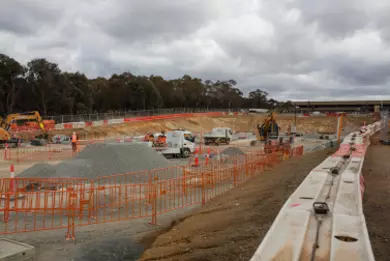 It follows another Deloitte report in June that showed the ACT’s economic growth performing well, on the back of international education and population growth, but pointing to a slowdown expected over the next 12 to 18 months.

It also highlights that the ACT and NSW were the only jurisdictions in the country to have greater definite work underway, compared with the value of planned state or territory-funded projects in the pipeline.

For Canberra, that was largely due to the expected completion of stage one of the light rail project later this year, which has been driving greater investment figures in the past two fiscal years.

“Since mid-2015 public sector investment has surged with work done more than doubling over the past two years,” the report reads.

Nationally, the report shows the value of the 1306 current infrastructure projects, worth more than $20 million, has fallen five per cent from the March quarter to the end of June this year, and is down the lowest level since December 2009.

That fall was largely due to the falls in mining-related business investment in the resource states, though the monitor points to a five per cent recovery in investment nationally in 2017-18, and expectations are growing for further gains this fiscal year.

Despite the completion of the light rail potentially foreboding a slowdown, the report points to strong growth in building approvals in ACT starting to flow through into construction work, despite a more recent tapering of approvals earlier this year.

The report says in building approvals the gains were widespread, with the strongest improvements

in the office accommodation, health and entertainment and recreation sectors in Canberra.

“Adding to this, the value of building approvals has almost doubled over the past year,” the report reads.

It also shows there is currently $2.7 billion work of state-owned projects in the ACT, up 8.7 per cent on a year ago, with a further $182 million in potential projects under consideration, but none in Canberra defined as “possible”.

The report also highlighted the tiny overall contribution of the territory’s investment to the total national pool of public sector-funded projects, at $4.4 billion, or just 0.6 per cent of the $751 billion total.

Newcastle is the next big thing to boom

Sydney residents move out as city depends on migrants for growth