Australian home prices fell for an eleventh consecutive month in August, led by declines in a majority of capital cities. 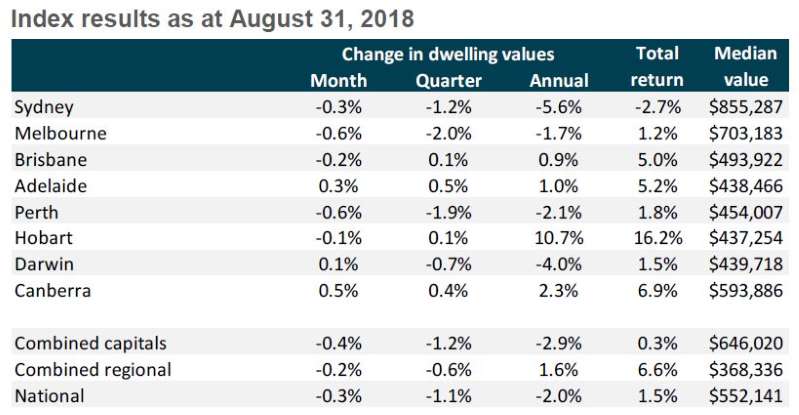 As has been the case for several months, the decline in August was led by capital markets with the median home price falling 0.4% from July.

“Five of the eight capital cities recorded a fall in dwelling values over the month, highlighting the weak housing market conditions are broad-based,” said Tim Lawless, Head of Research at CoreLogic.

“The only cities where dwelling values edged higher in August were Adelaide, Darwin and Canberra.”

Prices fell by 0.6% apiece in Melbourne and Perth last month, the fastest declines seen across the country. Prices also fell 0.3% in Sydney, 0.2% in Brisbane and 0.1% in Hobart.

The broad-based declines left capital city prices down 1.2% over the past three months, led by a 2% drop in Melbourne’s median home price over this period.

“Perth isn’t far behind with values down 1.9% over the past three months, reversing the temporary positive movements recorded earlier in the year.”

Prices in Sydney and Darwin also weakened also weakened over the past three months, losing 1.2% and 0.7% respectively. In contrast, prices in all other capitals rose during this period, led by a 0.5% increase in Adelaide.

“Adelaide rose to the top of the quarterly performance stakes over the three months to the end of August, taking over from Hobart where values have posted two consecutive months of subtle falls,” Lawless said.

“Adelaide dwelling values were half a percent higher over the past three months with quarterly gains also recorded in Canberra as well as Hobart and Brisbane, both up +0.1%.”

Despite the gains in those markets, house prices in capital city markets fell 1.3% in average weighted terms over the past three months. Unit values also eased by 1% over this period.

“Over the year to date, the weakest housing market conditions are concentrated in Sydney and Melbourne where dwelling values were previously rising the fastest,” Lawless said, adding they have now fallen 3.5% and 3.3% respectively over the first eight months of the year.

“Considering the sheer size of the cities — Sydney and Melbourne comprise approximately 60% of Australia’s housing market by value, and 40% by number — the weaker performance in these cities has a significant drag down effect on the combined capitals and national reading of the market.”

With prices in Sydney and Melbourne continuing to weaken, it left the annual decline in capital city values down 2.9% over the past year in average weighted terms.

This was despite gains being recorded in four of Australia’s eight capital city markets during this period.

“The overall housing market weakness is heavily concentrated across the premium sector of the market,” Lawless said.

“The CoreLogic stratified hedonic index recorded a 5.4% fall in values across the upper quartile of the combined capitals over the past twelve months, while the broad middle of the market is down 0.5% over the year and the most inexpensive quartile has recorded a 0.6% rise in values.

“This trend towards weaker premium housing market conditions is largely attributable to larger falls across Sydney and Melbourne’s most expensive quarter of properties where values are down 8.1% and 5.2% over the past twelve months.” 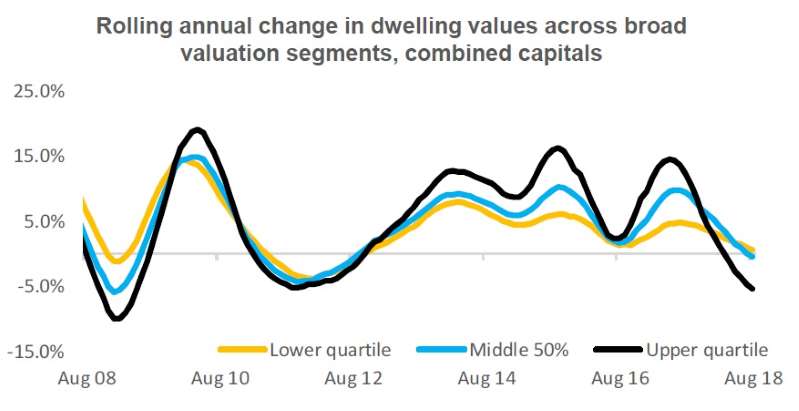 Lawless said the downturn in the top end of the market reflected the impact of tighter lending standards, especially for high loan-to-income borrowers.

“In the higher value cities like Sydney and Melbourne we’re seeing typical dwelling prices remain more than 8 times higher than median household incomes, suggesting tighter credit conditions for borrowers with a high debt-to-income ratio will likely impact on demand more in these cities over others,” he said.

Nationwide, capital city house prices slipped 3.5% over the past year, near double the 1.8% decline in unit value during this period.

In contrast to the performance from capital city markets, regional areas continued to outperform with prices falling at a slower pace over the month, quarter and year.

Looking ahead, and given recent trends, Lawless said the outlook for the housing market during Spring — typically the busiest in terms of market activity — will be “challenging”.

“Advertised stock levels are already 7.6% higher than the same time last year across the combined capitals despite a 5.7% reduction in fresh stock being added to the market,” he said.

“The rise in inventory is simply due to a lack of absorption. With fewer buyers, homes are taking longer to sell and clearance rates have trended into the mid-to-low 50% range.”

Given the decline lift in stock available for sale and decline in auction clearance rates — indicating a still-wide gulf between buyer and vendor price expectations — Lawless says that “vendors will need to be realistic about their pricing expectations” in the period ahead.

He says the possibility of further out-of-cycle mortgage rate increases and a potential change in government at the next federal election are all “wildcards” that could create further headwinds for the housing market in the months ahead.

This table from CoreLogic looks at the breakdown of price movements by time frame, location and property type in more granular detail. 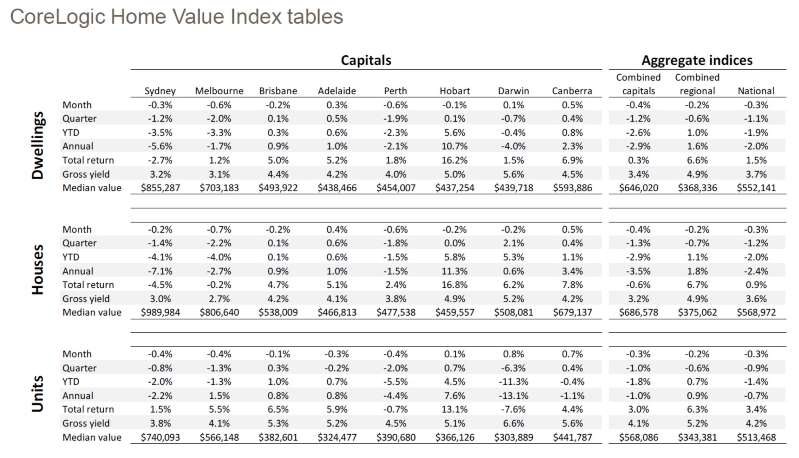 How long does a mortgage take to pay off?