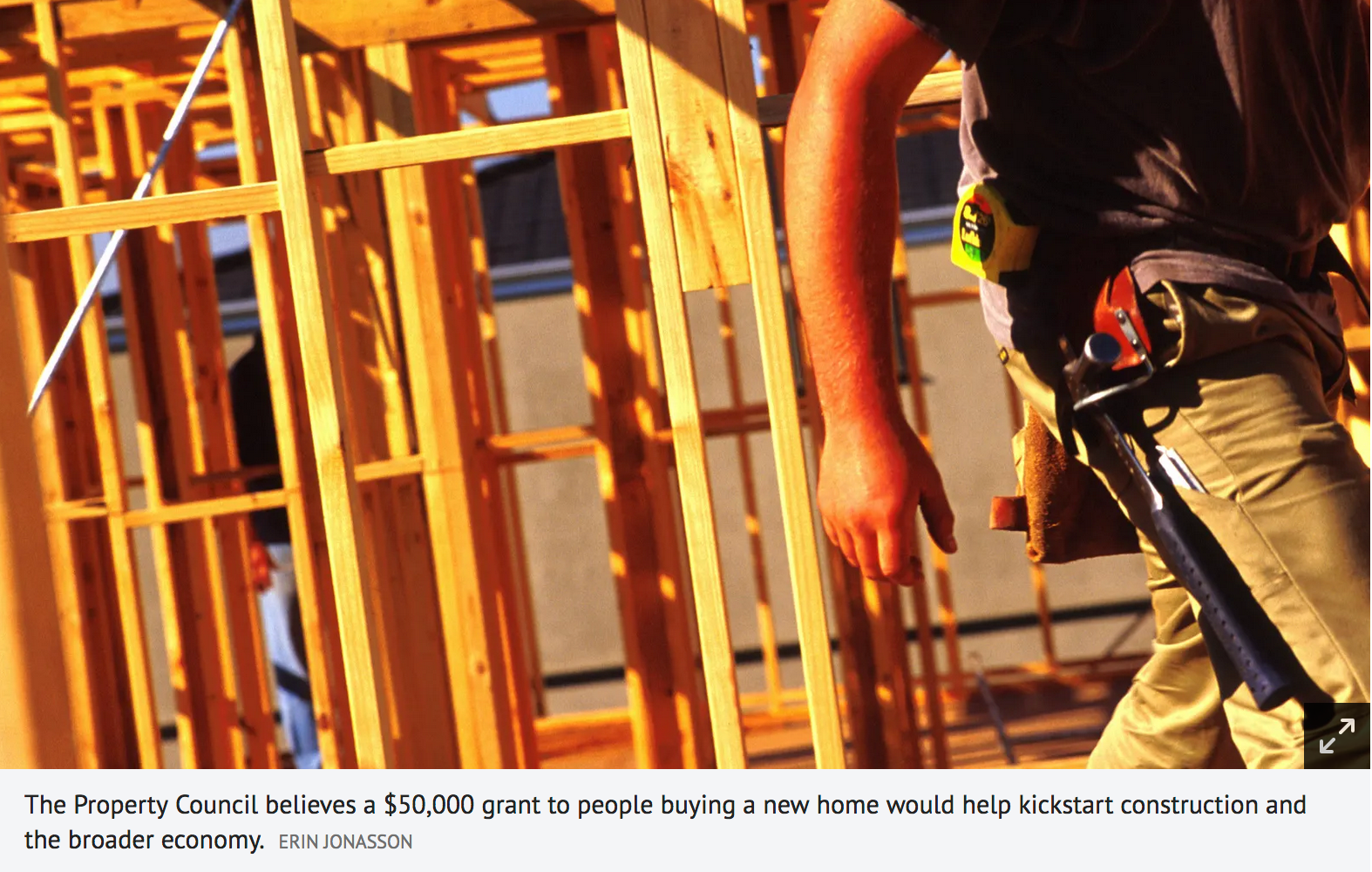 Buyers of freshly built homes would get a $50,000 cheque from the Morrison government under a $2.5 billion plan from the Property Council to kickstart the economy amid Reserve Bank warnings the housing sector faces an extended period of pain.

The council also wants the abolition of stamp duty, the broadening of the GST and a "welcome migration" campaign aimed at luring foreigners to Australia. On Wednesday, the group said without change the residential sector would weigh on the economy in the wake of the coronavirus pandemic.

Home builders have already reported contract cancellation rates of more than 30 per cent since the shutdown of key parts of the economy to prevent the spread of the virus, while the construction sector, which employs more than 1.1 million people, has shed at least 5 per cent of its workforce since March.

Council chief executive Ken Morrison said bold policies were needed to get the economy, expected to shrink by 10 per cent in the June quarter, re-started with the housing sector a key element of the recovery.

“As Australia’s biggest employer which contributes over 13 per cent of GDP, the property industry can be a powerhouse behind economic recovery and growth with the right policy settings and market incentives from the federal, state and territory governments,” he said.

At the heart of its proposals is a $50,000 "new home boost" for buyers of new housing, which the council estimates would stimulate the construction of 50,000 dwellings and support 200,000 jobs.

It would dwarf the $21,000 in grants that were available to first time home owners who bought new buildings during the global financial crisis under the Rudd government's stimulus program.

The program would run for 12 months and be limited to 50,000 properties, while there would be no cap on the value of the home.

The council is also calling for major tax changes to support the sector, including the removal of state stamp duty and its replacement through a broadening of the GST base. Only four large areas, including fresh food, education and health, are excluded from the GST.
The Morrison government is expecting net migration numbers to collapse this financial year and next due in large part to the restrictions on global border movements.

The council wants a "Welcome to Australia" migration plan that would include a major advertising campaign to promote the country as a safe and healthy destination. It argues the current points system for skilled migration should be temporarily lowered and people encouraged to live in major capitals as well as regional centres.

Housing construction and the property sector is growing as an issue for the Reserve Bank, which noted in the minutes of its most recent meeting that a drop in employment, incomes and wealth will have a direct impact on general consumer spending.

The minutes, released on Tuesday, show building companies are already reporting a drop in demand for new and established housing while cash-strapped Australians are moving back in with their parents or share-houses."Lower incomes and confidence, as well as lower expected population growth, were expected to affect demand for new housing for an extended period," the minutes showed.

There are also concerns about the commercial property sector, with rents in major capitals expected to fall with many businesses having staff working from home rather than CBDs.