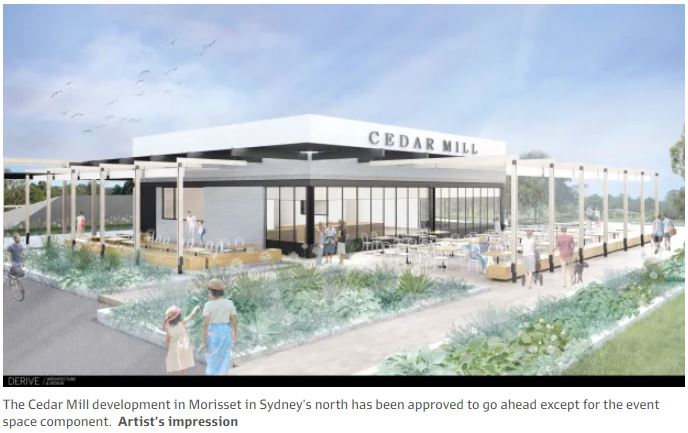 Lake Macquarie Council has approved Winarch Capital's $235 million redevelopment of the 90 hectare Morisset Golf Course, allowing the developer to subdivide and sell part of the site to Ingenia Communities.

Winarch Capital managing director Paul Lambess said the council has given the green light to five out of six development applications for the project known as Cedar Mill, lodged in September last year.

Mr Lambess has sought approvals to split and develop the site into four precincts consisting of the family and community space, a cultural, arts and events space, tourism accommodation and lifestyle living.

The events space, which includes an amphitheatre with a capacity to host 30,000 people, takes up 40 per cent of the entire site.

"We got all but one – the development application for the live music event venue – because we need to do further studies, but we expect it to be approved as soon as we've done what's required," Mr Lambess said.

"We've been granted approval to develop the 25-hectare lifestyle living component in the southern end of the site into 427 dwellings, which Ingenia has purchased."

Approval was also granted for the development of the tourist park which can accommodate 300 camping caravans and cabin sites to complement the events space.

The council has also given permission for Winarch to redevelop the existing clubhouse into a family and community precinct that will feature cafes, restaurants, gardens and a giant water splash park – touted to be Australia’s largest splash pad when completed.

"We'll get started straight away because we still want to be open by September next year, obviously depending on the virus situation," Mr Lambess said.

"There's a strong need for economic activity at the moment so we can play our role as a catalyst by being a key employer and add construction activity in the area."

Located 111 kilometres north of Sydney and 45 kilometres south west of Newcastle, Morisset has been identified as a key economic growth area within the Lake Macquarie region.

The Cedar Mill project could contribute more than $790 million to the local economy and create 1124 jobs during construction, it is estimated.

"Dantia supported us from initial idea through to DA lodgement," Mr Lambess said. "They provided critical insights, removed barriers and were instrumental in achieving the traction and ambitious time frames we set for this project."

Ingenia Communities chief executive Simon Owen said the company paid $30 million for the site, with half of it to be paid upfront and the balance staged over the next couple of years.

The money will come from the cash Ingenia raised last year and from its development partner, Sun Communities.

Construction of the over-55's housing development is likely to start by April next year, with completion expected around early 2022.

"This will be the largest project we have ever undertaken in NSW and probably the largest land lease community that we're aware of in the state," Mr Owen said.

"To get that much attractive land so close to Sydney and with so many services was a great opportunity."

Ingenia has already established presence in the Morisset community with its 2013 acquisition of The Grange – a retirement community hosting 230 modular homes.