The year regional housing turned property on its head 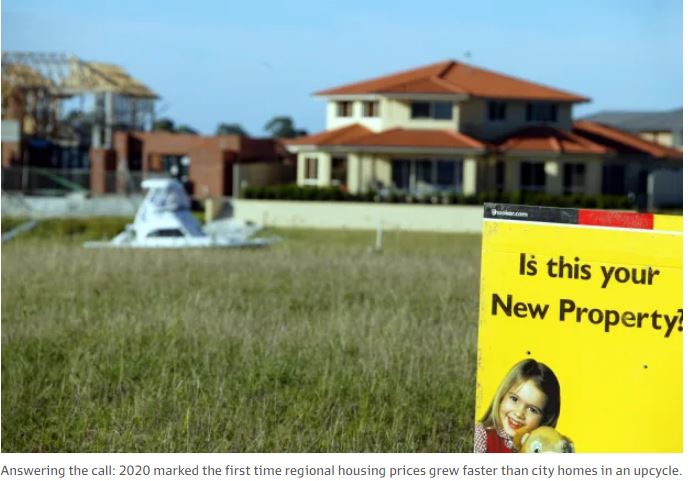 The year regional housing turned property on its head

The pandemic that made city-dwellers flee urban environments for the relative safety and space of country living turned housing markets on their head, making regional prices grow faster than metropolitan values for the first time in nearly 15 years.

Regional property values jumped 6.9 per cent in the 12 months to December, more than three times the 2 per cent figure of the combined capital cities, CoreLogic figures on Monday showed.

Sydney home values gained 2.7 per cent over the year while in Melbourne, hit hardest by the pandemic, values fell 1.3 per cent.

"This is the first time during the growth phase we've seen regional markets outpacing capital cities. And it's [by] quite a margin."

It is not a weak picture for the cities, however. The combined 0.9 per cent increase in home values in December alone reflected healthy gains in each of the key eight cities.

Darwin led the way with a jump of 2.3 per cent, Brisbane, Adelaide and Perth each had a 1.1 per cent increase, Melbourne was up 1 per cent, Sydney and Hobart rose 0.7 per cent and Canberra was up 0.6 per cent.

"People are feeling much better about their own household financial circumstances. Record low interest rates are helping that along as well.

"We've got credit availability – everything's quite liquid at the moment. That all feeds into a real surge in buyer demand at a time when we're seeing stock levels relatively low.''

The number of transactions in calendar 2020 was up 8 per cent on 2019, even though the volume of listings was 21 per cent down.

The combination of factors, buoyed further by support measures such as JobKeeper and mortgage repayment holidays, sustained the market, contributing to Brisbane, Adelaide, Hobart and Canberra all sitting at record highs in CoreLogic's so-called hedonic index of housing values.

Melbourne home values are still 4.1 per cent below their March 2020 peak and Sydney is 3.9 per cent below the peak it hit in July 2017, but the quarterly rates of gain in each city put both on track to surpass those peaks by September, Mr Lawless said.

Even though Perth is expected to be a stand-out performer this year as resource prices boom and the WA economy gathers steam, prices remain 20 per cent below their previous high in 2014 and Mr Lawless said it was likely to take two years for the city to regain that level. 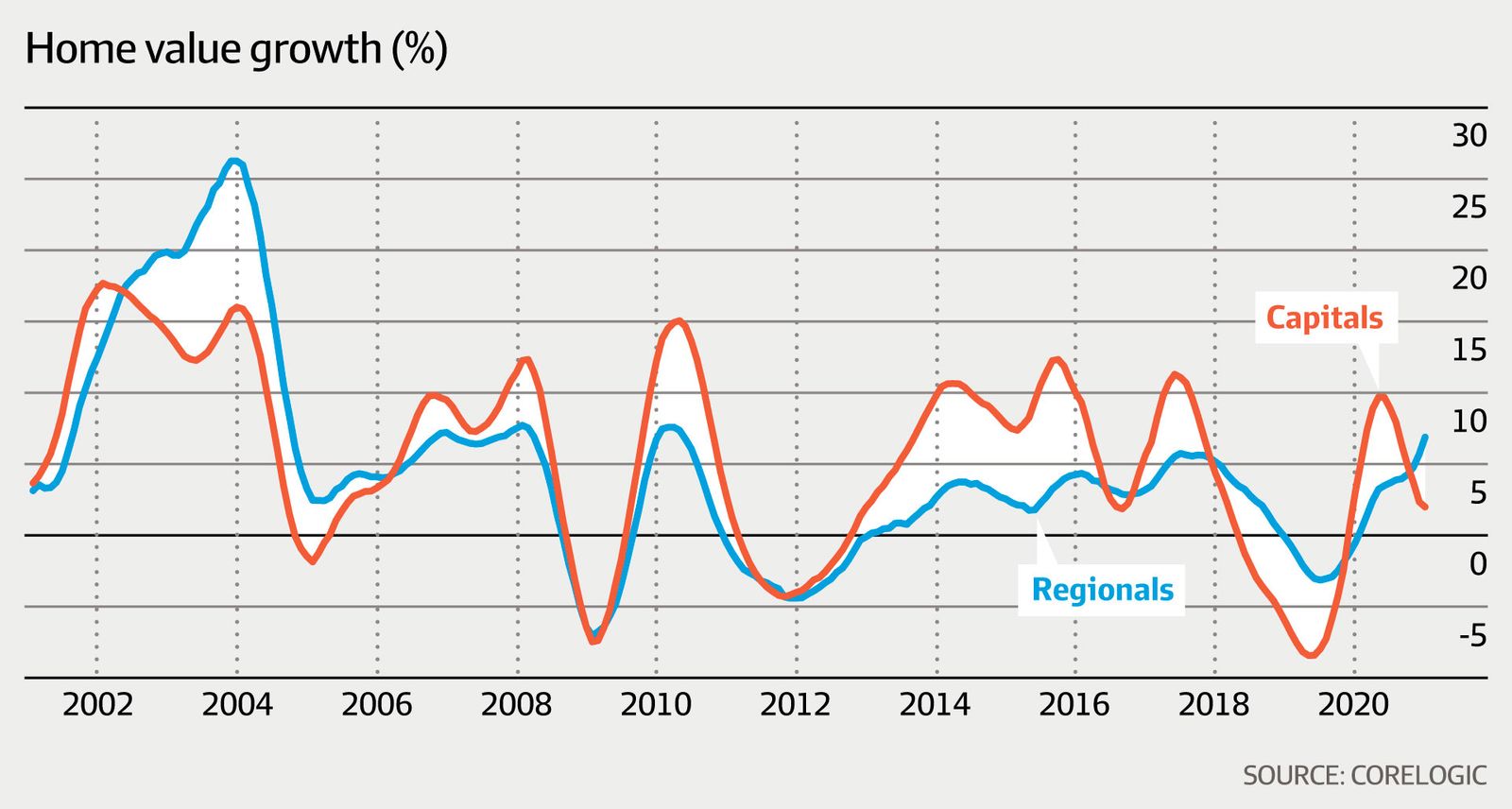 Darwin, which remains almost 26 per cent below its 2014 peak would also take about two years for values to make up their lost ground, Mr Lawless said.

Risks to the market remained, but they were smaller than before, he said.

"The wind-back of support is still a risk but much less risk than we were thinking in the middle of last year," Mr Lawless said.

"The economy bounced back so quickly, responding to all of the government incentives, and so similarly, the expiry of mortgage payment deferrals scheduled for March is still a risk, but much less of a risk than it was around the middle of last year."

Different parts of the housing market were more risky than others. High-rise apartment markets in Sydney and Melbourne, being so dependent on migration inflows, particularly from overseas students, were likely to be hit harder the longer curbs on inward migration lasted – a situation that would be compounded by the volumes of new stock coming into those markets as projects completed, Mr Lawless said.

The risks to different niches of the housing market could also be seen in renters' situations.

"If you're a renter in the inner-city apartment market, you're on a pretty good wicket. Rent is coming down significantly. Renters looking for rental accommodation in suburbia, a detached house or regional market ... have seen rents rising quite substantially."