The HomeBuilder grant scheme is twice as popular as anticipated and is set to cost the government an expected $2 billion.

The original estimate for the scheme was $680 million for 27,000 grants when the prime minister first announced the initiative in June.

The latest figures released from the federal government shows nearly 75,000 households have taken up the offer for the $25,000 grant before 31 December.

Although the cash grant wound down to $15,000, the grant will continue to 31 March with the construction commencement date extended to six months, continuing to boost the residential sector.

The treasury estimates HomeBuilder will now support up to $18 billion residential projects supporting construction into 2022.

Minister for housing Michael Sukkar said they were pleasantly surprised with the results of the demand driven program .

“HomeBuilder was designed immediately to inject confidence and encourage buyers back into the market to offset the devastating effects of the pandemic on the residential construction industry,” Sukkar said.

“On all counts HomeBuilder has more than achieved this objective, and it has kept hundreds of thousands of tradies in work who would have otherwise been facing the unemployment queue.

“This is a phenomenal outcome for our tradies and for our economy at a time it needs it most.”

However the grant scheme and low interest rates have brought forward buyers leading the Reserve Bank analysts to predict home prices could increase by 30 percent.

New home sales have jumped to the highest point in 20 years according to the latest HIA report.

Across the country, new home sales in the December quarter were higher in all regions when compared with the same period in 2019. 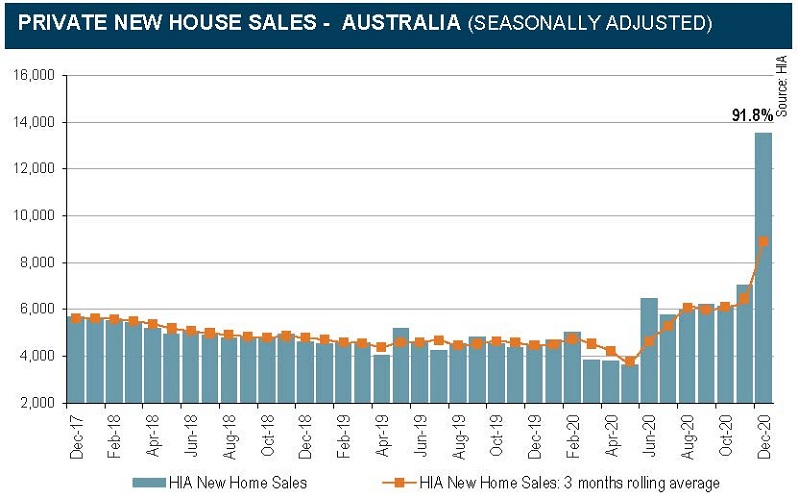 HIA economist Angela Lillicrap said this is the second strongest month of New Home Sales in the 20 year history of the survey, only exceeded by March 2001.

“The extension of the timeframe to commence building from three months to six, which was announced in November, played a significant role in December’s results,” Lillicrap said.

“This is an exceptional result given the nature of the pandemic and the effect that it has had on the broader economy.”

So far global house prices have defied the pandemic however the likelihood of a house price bubble and its risk of bursting is yet to be seen.