Lockdowns spark city exodus as thousands head to the hills 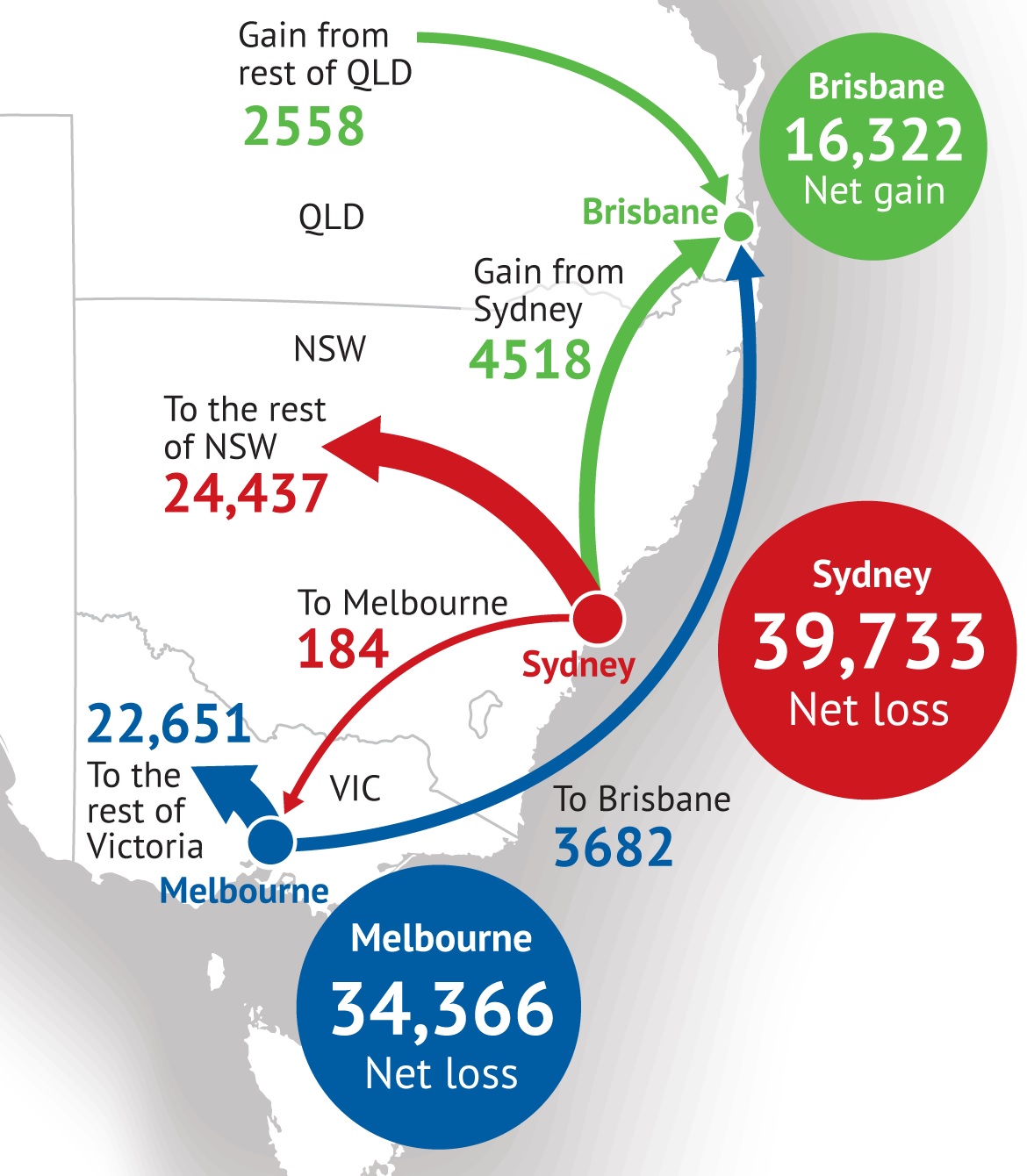 Lockdowns spark city exodus as thousands head to the hills

Since the start of the pandemic, a net 24,500 people have left Sydney for other parts of NSW. In total, almost 40,000 have moved out of Sydney since the pandemic started, with more than 10 per cent making the move to Brisbane..

But there are signs of change. In the first three months of this year, NSW gained a net 880 people from Victoria - the first time since the middle of 2017. But it lost people to every other state or territory.

Of those leaving Sydney, the biggest movement was by people aged between 45 and 64, with a net 2700 ditching the nation's largest city. They took their children, with a net loss of 2100 people aged under 14.

While Sydney and Melbourne shed residents, Brisbane and Perth are increasingly attractive to internal migrants. Brisbane has gained 16,300 people from other parts of the country since the start of the pandemic while Perth has gained 5072.

"Melbourne is a good case study. Before COVID, Melbourne was drawing people in every quarter from elsewhere in Australia. The second COVID hit and we had long lockdowns, we saw a significant outflow of people from Greater Melbourne," he said.

However, Mr Rawnsley said it looked as though young people were starting to return to cities such as Melbourne for education and lifestyle while older age groups continued to head for the hills in high numbers.

Working from home and flexible work might have a longer-term effect, allowing people to "stretch the travel budget" to up to two hours each way if not working in the office every day.

But the flipside was the effects in the regions, he said.

"A lot of regional communities have seen a huge surge in house prices and rents as more people have moved there. Part of the reason you’d go to a regional centre is to get away from COVID lockdown but also for more affordable housing. That [affordability] has disappeared quite quickly.

"The new challenge is that the regional areas which haven't experienced population growth for a long time weren't ready to accommodate this growth."

"The exodus from the city to the regions is being led by baby boomers and Generation X. In part, COVID-19 may be driving retirement plans. But the 25 to 44 cohort isn't far behind," he said.

HIA chief economist Tim Reardon said the increase in people shifting to regions was affecting their property markets, noting the change might be permanent.

"Given that the population is moving interstate and building new homes it is unlikely that they intend to return to Sydney or Melbourne," he said.

While high house prices and lockdowns are driving changes in where Australians live, the Reserve Bank remains convinced the economy will rebound in the coming months.

The RBA held the official cash rate at 0.1 per cent following its board meeting on Tuesday and resisted making changes to its quantitative easing program.

Governor Philip Lowe said it was likely the September-quarter national accounts would show the economy contracting because of the impact of lockdowns in Sydney, Victoria, south-east Queensland and South Australia.

But in a sign the RBA believes there is enough stimulus already in the economy, Dr Lowe said previous lockdowns had been overcome relatively quickly.

"The experience to date has been that once virus outbreaks are contained, the economy bounces back quickly. Prior to the current virus outbreaks, the Australian economy had considerable momentum and it is still expected to grow strongly again next year," he said.