Huge Mardi subdivision to be decided by regional panel 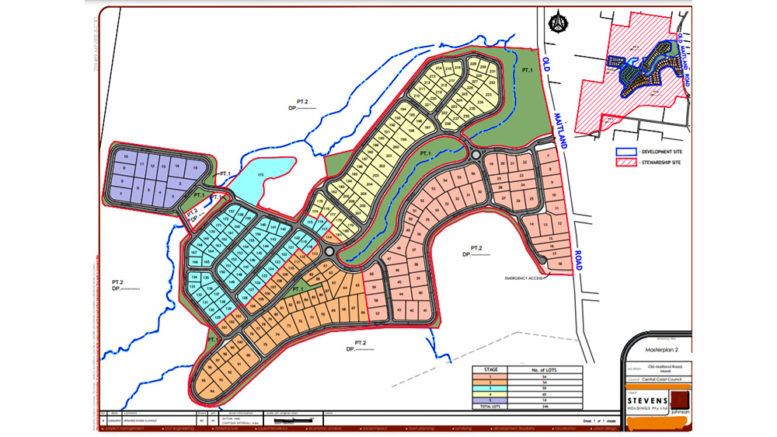 Huge Mardi subdivision to be decided by regional panel

A 246-lot community title subdivision at Mardi has been submitted to Central Coast Council and will be decided by the Hunter Central Coast Regional Planning Panel.

The 223ha site is eight allotments collectively known as 414 Old Maitland Road, Mardi, situated to the west of the M1 Motorway.

It has rural development to the north and east with Mardi Dam to the south and Ourimbah State Forest to the west.

The application says that while the site represents the only residential land west of the M1 freeway, all services are available to future residents within a few kilometres.

Tuggerah Westfield is about three kilometres to the south and offers medical, banking, shopping, entertainment and recreation facilities and bus and rail services near Westfield.

There are five development lots representing each stage in the subdivision with both stages one and two comprising 54 lots, the third stage with 59 lots, the fourth with 65 and the final stage five comprising 14 lots in a Neighbourhood Scheme.

The plan includes the provision of services internally and externally to the site including stormwater water, sewer, electricity and NBN.

As required under the zoning, the minimum lot size is 900sqm, but 70 per cent of the lot area is made up of lots of more than 1800sqm.

To ensure that the subdivision blends with the surrounding rural landscape, those lots closest to Old Maitland Rd all have an area in excess of 1800sqm, according to the development application (DA) from the Stephens Group to Council.

Council will submit the proposal to the Hunter Central Coast Planning Panel (which is one step higher than the Local Planning Panel and deals with bigger developments) but often this process takes at least a year.

The entire site of 223ha, predominantly grazing land in the past with the farmhouse still being used, was the subject of a rezoning proposal over an extended period of time beginning last century - around 1999.

When the process first began, development was being sought over the entire property including the ridge tops, side slopes and valley floor, the DA says.

"As investigations proceeded, agreement was reached with the various government agencies including the Office of Environment and Heritage (2015) and Wyong Council (2016) regarding the developable portion of the site," it says in the DA.

"As a result, a Voluntary Planning Agreement (VPA) was entered into between the landowner and Wyong Council in 2016.

"As a consequence of the above, the valley floor has been rezoned predominantly R5 large lot residential with a central corridor zoned E3 Environmental Management.

"The remainder of the land, some 160ha is zoned E2 Environmental Conservation."

The proposal will also provide protection for about 2kms of Deep Creek and its tributaries.

The proposal was lodged on July 23 and is currently under assessment.