House prices jump $52,600 in three months, and the Reserve Bank says it can't do much about it 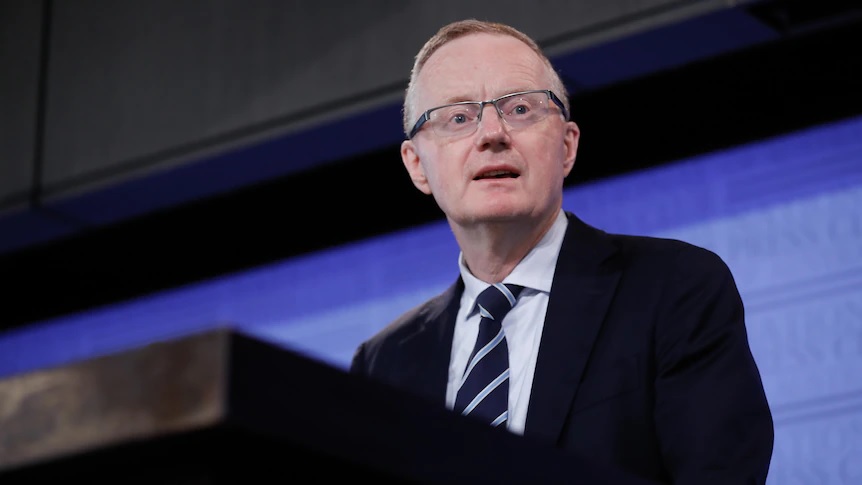 House prices jump $52,600 in three months, and the Reserve Bank says it can't do much about it

Reserve Bank Governor Philip Lowe says the economic recovery will depend heavily on the level of vaccinations and how Australians adapt to living with COVID.

Australian house prices are now 19 per cent higher than they were before the pandemic, but the Reserve Bank of Australia won't be lifting interest rates to dampen them.

RBA governor Philip Lowe said he had said it before, but it was not the role of monetary policy to target house prices.

"Ever-rising housing prices relative to income, I don't think serves our collective good very well, it's something that as a citizen I would like to see addressed, but as a central bank we can't do anything about," he said.

Dr Lowe said he also did not understand why financial markets were assuming he would start lifting the cash rate target next year.

He said he would only lift the cash rate when wages were growing at an annual pace of 3 per cent at least, and when inflation was comfortably within a 2 to 3 per cent band.

The cash rate target is currently sitting at a record-low 0.1 per cent, which is feeding the rapid growth in house prices.

"Our judgement is that this condition for a lift in the cash rate will not be met before 2024," he said.

"While monetary policy is contributing to higher housing prices at the moment, the way to address these concerns is through the structural factors that influence the value of the land upon which our dwellings are built."

Dr Lowe delivered his annual address to the Anika Foundation on Tuesday.

A few hours earlier, new Australian Bureau of Statistics data showed property prices rose by 6.7 per cent in the June quarter, which was the strongest quarterly growth in 18 years.

Twelve months ago, the mean price of residential dwellings was $689,400.

He said that lift in the net wealth of households suggested that once the current restrictions were eased, households would be well placed to start spending again.

He said he was conscious of concerns about the level of house prices, but the problem shouldn't be fixed by lifting interest rates.

"While it is true that higher interest rates would, all else equal, see lower housing prices, they would also mean fewer jobs and lower wages growth," he said.

"This is a poor trade-off in the current circumstances."

He said the way to address concerns about house prices was by targeting the structural factors that influenced the value of land.

"The factors include: the design of our taxation and social security systems; planning and zoning restrictions; the type of dwellings that are built; and the nature of our transportation networks," he said.

"These are all obviously areas outside the domain of monetary policy and the central bank."

The economic recovery was going well, but then Delta hit

On the state of the economy, Dr Lowe said the recovery had been going well before New South Wales lost control of the Delta variant in June.

He said conditions had been looking "pretty positive" and the RBA board was even contemplating revising its economic forecasts upwards.

"But then Delta hit," he said.

"The result is that the economy will now contract significantly in the September quarter."

He said he thought the setback would still only be temporary, and the economy would grow again in the December quarter and be back to its pre-COVID trend by the middle of next year.

But much depended on the rate of vaccinations nationally, he said.

There was also a risk that more contagious variants of the coronavirus would arrive from overseas and derail things again.

"The key drivers here are the increasing rate of vaccination and the easing of restrictions on economic activity," he said.

"Governments have indicated that, as these figures continue to increase, restrictions on activity will be eased. When this happen, we can be confident that economic activity will begin to bounce back."

What about the unemployment rate?

Dr Lowe said the unemployment rate would likely rise in coming months, but the numbers would be harder to interpret than usual.

He said "hours worked," rather than headcount, would be a better guide to the health of the labour market in the short term, because the lockdowns in NSW and Victoria were seeing many people working reduced or zero hours.

"Total hours worked are expected to decline by 3 to 4 per cent in the September quarter," he said.

"There is uncertainty about the unemployment rate for the reasons I just spoke about, but it would not be surprising to see readings in the high 5s for a short period of time."

The unemployment rate is currently sitting at 4.6 per cent.

The next monthly unemployment data will be released on Thursday. It will show what happened to the labour force in August.

It is expected to capture more of the impact of the lockdowns in NSW and Victoria than the July figures did.

Cash rate to remain at record low for years

Dr Lowe also reiterated his plan for the cash rate.

He said it was very unlikely the cash rate target would be lifted before 2024, and he didn't know why financial markets were assuming the cash rate would increase by roughly 0.8 percentage points between now and then.

He said labour markets would have to tighten considerably to get wages growing at 3 per cent and inflation sitting sustainably higher for the RBA to lift the cash rate. 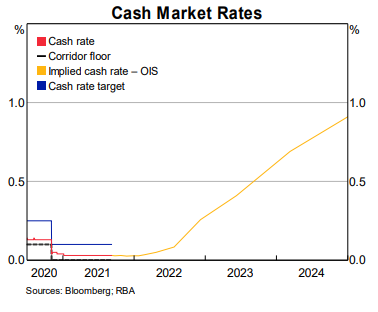 The RBA governor says the expected path of the cash rate implied by market pricing (yellow line) is running well ahead of the RBA's plan.

"These expectations are difficult to reconcile with the picture I just outlined and I find it difficult to understand why rate rises are being priced in next year or early 2023.

"While policy rates might be increased in other countries over this timeframe, our wage and inflation experience is quite different.

"Our judgement is that this condition for a lift in the cash rate will not be met before 2024," he said.