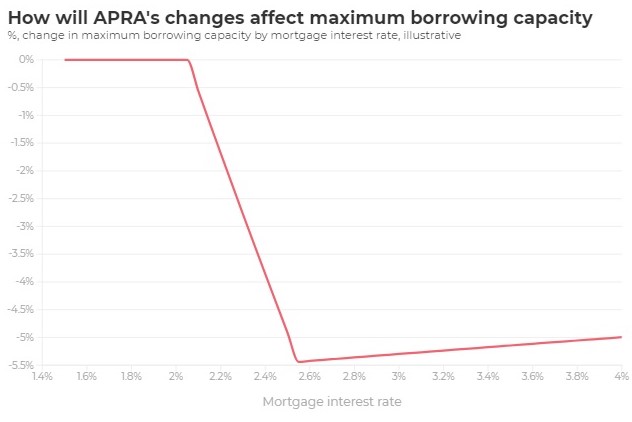 News the banking regulator APRA wants banks to use a higher interest rate buffer when assessing home loan applications has put many borrowers on edge, however investors will likely bear the brunt of the changes.

For example, a borrower being offered a mortgage rate of 2.8% will have a maximum loan size determined by their ability to service a loan with an interest rate of at least 5.8%.

Who will be affected?

But whether a borrower will feel the effects of this change depends on two things:

1. The change only reduces maximum borrowing capacity. Not everyone borrows the maximum that they could.

Estimates from CBA suggest about 8% of borrowers do borrow at maximum capacity. However, a great deal more will fall just below.

Any borrowers who would have previously been just-shy of their maximum will be on or above their maximum borrowing capacity under the changes. We don't have a good sense of how large that group of people is, nor how they split between investors, owner-occupiers, first-home buyers, etc.

2. The buffer is not the only restriction on how banks assess maximum loan size.

It means lenders can assess whether borrowers would still be able to meet their repayments on an interest rate that is at least 3% higher than their current interest rate, or the 'floor' rate set by the bank, whichever is higher.

The floor rates that banks use vary, but have been around 5% for much of the last couple years. This floor means that the new higher buffer only affects new borrowers whose mortgage interest rates are above roughly 2% - depending on the floor the lender uses.

It also means the change will have a bigger effect on borrowers whose interest rates are higher than 2.5% than those whose rates would be between 2% and 2.5%.

Since investor loans typically have higher interest rates, the new buffer will likely affect investors more than owner occupiers. The same logic applies to interest-only loans, which tend to have higher rates compared to principal-and-interest loans.

This focus on investors mirrors the last time APRA brought in so called macroprudential measures to curb lending. In December 2014, it imposed a 10% cap on the growth of investor lending.

This is not the first change to serviceability criteria.

In mid 2019, APRA removed the floor rate it had set for banks to use in assessing serviceability. Until then, APRA required banks to use a floor of at least 7%. In its place, APRA changed its guidance to allow banks to set their own minimum rate.

This change affected almost all borrowers. The previous floor of 7% was so high relative to mortgage rates at the time that it bound in almost all cases.

This lowering of the floor worked in the opposite direction to the current change. It materially increased borrowing capacity for many borrowers and aligned with the start of the current upswing in house prices. Reductions in the official cash rate around the time also played a part.

More changes on the horizon

With all these official publications about measures and how to implement them, it seems very likely that further changes are coming to curb lending that the CFR views as risky.