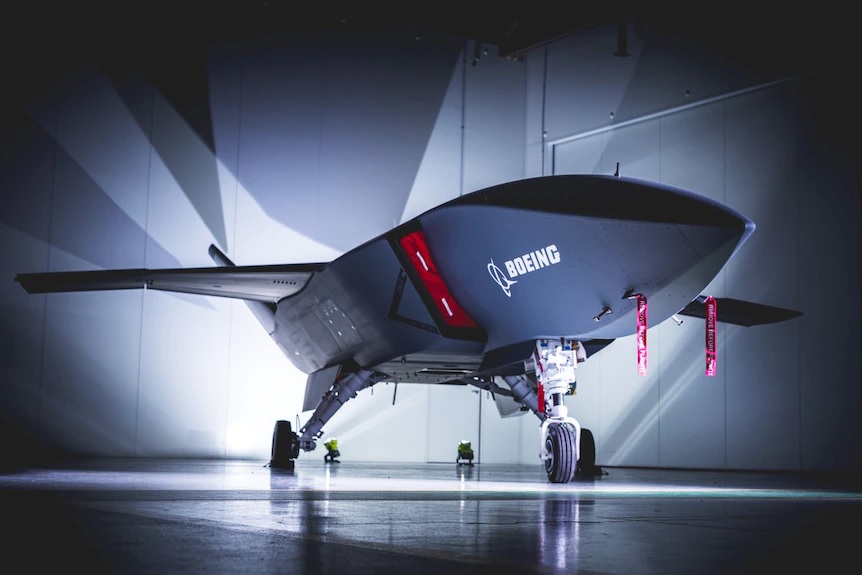 The Loyal Wingman has been developed in Australia and is expected to be produced near Toowoomba.

Boeing has announced it plans to build an unmanned military aircraft manufacturing facility near Toowoomba that could create more than 300 jobs across regional Queensland.

The site at the Wellcamp Aerospace and Defence Precinct would be the final assembly point for the Loyal Wingman planes, with the project subject to defence orders.

The combat aircraft with artificial intelligence is designed to operate as a team to extend the capabilities of other crewed and uncrewed planes.

It made its first flight in February and was the first of its kind designed, developed and manufactured in Australia in half a century. The Loyal Wingman had its first flight in February.

Boeing Australia's managing director Scott Carpendale said they were still working with the Queensland government and the Wagner Corporation, which owns the Wellcamp site, about how much the project would cost.

"We've been working with the federal government, through the design test certification phase, obviously very confident to move to production phase," he said.

"To support that we will need a production facility in the middle of this decade and so that's the timing that we're working towards." The federal government is yet to confirm an order for the aircraft.

He said Boeing did not have an order yet from the federal government but he was confident that process would commence.

Mr Carpendale said there was also interest from other countries. Queensland Premier Annastacia Palaszczuk at the announcement at Wellcamp today.

She said it was the first time Boeing would set up a facility of this scale outside of North America.

"When we look at diversifying our economy and the fact that we can actually have opportunities like this here in Queensland, essentially [it's] because we've had that strong health response [to COVID-19]," Ms Palaszczuk said. The project could receive tax support from the Queensland government.

Treasurer Cameron Dick said the federal government is working very closely with Boeing on determining an order for the aircraft.

"Subject to those final decisions, that facility will be built here and the aircraft will be made in Queensland," he said. The Queensland government could support the venture through tax relief.

"If there are incentives we can provide, if there is support we can provide whether that be a direct support, whether it be taxation relief for companies, we always look to do that," Mr Dick said.

"The initial estimate is a billion dollars in economic benefit to Queensland over the next 10 years."

Mr Dick said Queensland had a 10-year plan to grow the aerospace and aviation industry.

"We want this facility to be constructed here to be attractive ... for other people who want to invest in advanced manufacturing technology, aviation and aerospace," he said.

"Our vision for this precinct is to be the epicentre of aerospace and defence development, advanced manufacturing, globally, research and development and education," he said.