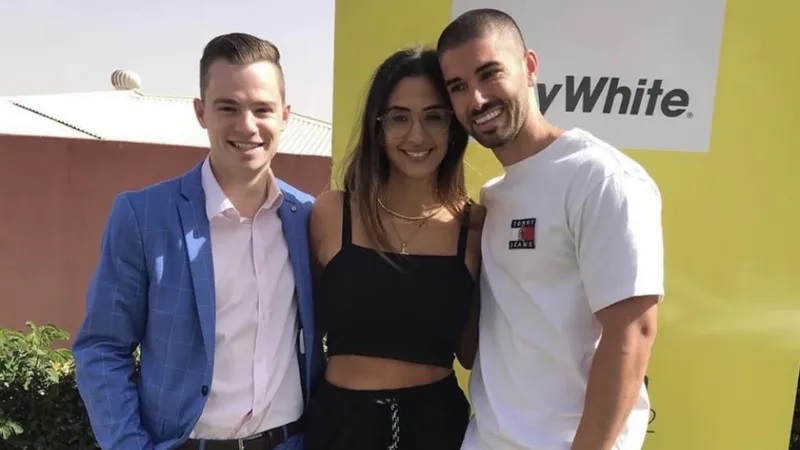 Young, rich Queenslanders from music celebs, to tech whizzes, sports stars and 'influencers' are working their mortgages almost as hard as their social media accounts, flocking to property to cement their millions.

"My prediction over the next few years is we will see a lot more younger generations get in the high end market," he said. "With the help of social media, technology I believe a lot more younger millionaires will come out of the blue. There are so many ways the influencing world can make money such as: onlyfans, drop shipping, stock market, crypto, Instagram, YouTube, brand deals plus much more."

Mr Bacon, who's currently going to auctions hunting for his own "low $1m range" home to sink his commissions into, said real estate was a reward for young high end buyers.

Influencer Jackson O’Doherty at the quirky Gold Coast mansion he fell in love with while in quarantine, and bought for almost $2.9m.

Comedian Jackson O'Doherty, who made his money off viral online videos with a million followers on Facebook alone, had been looking for a south east Queensland base for a year while offshore. He finally settled on a quirky Helensvale property for almost $2.9m - a business decision as much as it was a place to finally call home.

He was in quarantine after travelling back to Australia when the home was picked out for him by Mr Bacon, who acted as a buyers agent.

Comedian Jackson O'Doherty sporting some of Mr Bacon's client merchandise after he acted as his buying agent.

He fell in love with it after a Facetime tour before finally inspecting it once out of isolation.

"Dealing with a client like this is a little harder as the type of houses I had to find had to be unique or as we call it 'a content house', so something different so he could create epic content from the house just like the most recent video he did," Mr Bacon said.

Culture Kings co-founder Tahnee Beard has been super active in the property market in the past year.

Tah-Nee Beard, 33 - whose cult streetwear brand Culture Kings was valued at circa $600m when she and husband Simon Beard sold their stake in it - has also been super keen to sink funds into real estate. The couple's most prominent buy was the $15.25m Soul penthouse on the Gold Coast in July this year, though she also broke a suburb record selling her Ashmore waterfront luxury estate recent for $4.95m in August, and last year splashed out on an $11.75m mega mansion in Surfers Paradise last year.

Internationally renowned DJtyDi - Tyson Illingworth - picked Brisbane to invest his hard-earned dollars when his career took off, buying a two bedroom, two bathroom, skyhome in the CBD in 2011.

"I first bought this incredible apartment brand-new when my music career was exploding worldwide. I was studying a Bachelor's Degree of Music at South Bank and playing sold-out shows in Fortitude Valley before racing to the Brisbane Airport to catch flights both internationally and nationally every weekend, my apartment was no more than 10 minutes from all three places," was how he described the listing.

DJ tyDi sold his Brisbane apartment in April this year and has now moved to the Gold Coast.

"If I wanted to experience Brisbane's night-life scene, I'd catch the elevator downstairs and everything was at my doorstep. If I needed to head to the airport I was a very short drive away. In fact, I could see the airport from my apartment, not only that, I could also see the bay. There aren't many apartments in Brisbane where you can see boats on the water and also look directly down at the Story Bridge. The fireworks on the Story Bridge every year are incredible."

The super DJ - who had the floorplan renovated "to leave every single view unobstructed" - sold the property for $555,000 in April this year via Mr Bacon.

"This wasn't just an investment, it was a sky home. When I bought the apartment I wanted it to be something special, it was next-level quality of life."

He now lives on the Gold Coast where he has another two bedroom apartment in Surfers Paradise, bought for $670,000 in 2015.

Lachlan Power bought a $4.4m apartment at Kangaroo Point, which he uses as background for his viral videos.

Australia's richest YouTuber Brisbane millionaire Lachlan Power, 25 - son of the mayor of Logan Darren Power - is a gaming whiz, who earns upwards of $2.4m a year as a result of his skills. He bought a $4.375m apartment in Kangaroo Point under a company that his mother is a director for and has two other properties, including specially built in Cornubia that he picked up for $425,000 before getting development approval to put on a $277,000 house on it.

That site is now a seven bedroom property that comes with a half basketball court, pool, custom bar with backlit marble benchtops and feature stone wall cladding. His first property investment though was when he was 18 - a two-bedroom apartment in Newstead that he still owns after paying $462,000 for it in 2013.

Mr Bacon acted as a buyers agent for the deal after being introduced to Thessy's husband Georgio at the gym he owns fitazfk in Kangaroo Point. The 23-year-old agent said his role was more about "guiding them not to spend any more if I didn't believe the house was worth it".

"We purchased the home at auction and she was in tears with the rest of the family. They are planning to knock the house down this year sometime and have amazing plans for the home."

Mr Bacon said creating relationships among younger high-end buyers was as important as it was for older generations.

"It's amazing how the world works, since this year I have helped her family buy in the same street."

Quade Cooper had a patient journey back into the Wallabies spotlight via a stint in Melbourne with the Rebels.

Wallabies comeback king Quade Cooper has had more than one home sale in Brisbane, with the most recent being a stunning home in Bulimba that sold for $2.23m this year.

It was an Instagram message that connected Mr Cooper - who has 538,000 followers on Instagram - with Mr Bacon.

Among the challenges dealing with someone with such a huge international schedule was staying in touch during the extensive sale process, but the house was eventually sold to a Melbourne buyer.

Quade Cooper and his partner Laura Dundovic at the rooftop entertainment deck of the Brisbane home he has now sold for $2.23m.

Mr Bacon said it was all about fitting in with the needs of young, successful Queenslanders.

"Dealing with well known people they wanted to be treated like everyone else, which is the easiest way to deal with them. Everyone is different and it's my job to go above and beyond, whether that's finding them rentals to live in and organising it all or looking at properties to buy and not getting paid out of it, it's a part of my service."