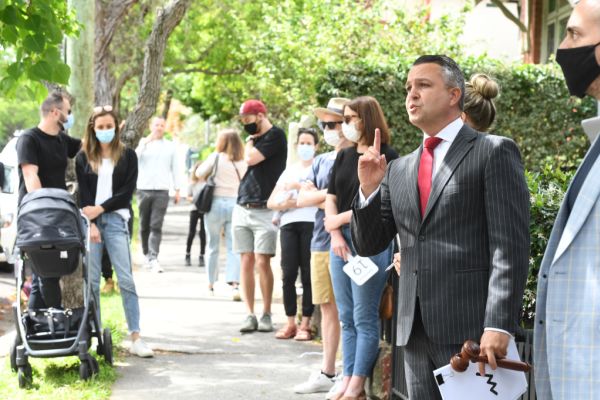 The property market's high tide could slowly be turning, agents say, as more homes hit the market, stricter stress tests on borrowing kick in, the RBA signals rate hikes earlier than expected and the end of lockdowns mean potential buyers are booking overseas holidays rather than shopping for real estate.

Nowhere is that more evident than in Sydney, where clearance rates slipped below 80 per cent for the third week in a row and there was a 32.4 per cent spike in new listings in the past four weeks, Domain figures reveal.

In the past week alone there was a two per cent rise in Sydney listings, the highest volume of new listings added on a weekly basis all year, giving buyers something they hadn’t had in a long while: choice.

"Newer listings are coming on [faster] than they are being purchased," said Nicola Powell, Domain's chief of research and economics. "It's probably the outcome that many buyers have been wanting for a long time."

"As long as we see listings track strongly we could see the market tip towards buyers. It's a good sign for buyers, particularly those who have missed out. It was ferocious at the beginning of the year.

"We're not there yet but what we're seeing is conditions are easing. It will eventually tip towards a buyers' market. We know that 70 per cent clearance suggest prices are going to rise. Sixty per cent is the benchmark for house price inflation."

The drop in the number of homes clearing at auction in Sydney for the past three weeks eased the monthly clearance rate in October from 78.1 per cent to 77.3 per cent, ending two consecutive months of improving clearance rates.

More than four in 10 homes in Sydney were selling prior to auction day in October, another sign that the market could be cooling as the number of buyers thins out, according to Thomas McGlynn, BresicWhitney's director of sales and chief auctioneer.

"That can be a sign that the way buyers are wanting to interact with properties is starting to slow down a little bit," Mr McGlynn said. "For any buyers out there looking, it’s a really good time to push forward and buy. They're in a much more fair environment."

He said there were "opportunities" for buyers looking for inner-city apartments and terraces and a fairer marketplace for anything in the $2 million to $4 million price range.

But the dipping clearance rate isn't a national trend, with a full month of on-site inspections in Canberra propelling the city's clearance rate higher, rising from 86.9 per cent to 88.3 per cent in October.

Unless new listing volumes increase in the ACT, stiff competition for the few homes available on the market will persist, Dr Powell said.

"Supplies are continuing to track lower and lower in Canberra. It recorded a multi-year low."

In Melbourne, clearance rates reached their highest level for 2021 in October, with 75.3 per cent of properties selling at auction and 28.7 per cent selling prior.

Despite new listings dropping in the week ending November 6, compared to the week prior, it was the fifth highest week for new listings in the year.

While Dr Powell said Melbourne still had heat left in its market due to its prolonged harsh lockdown, Nelson Alexander's director Arch Staver believed it had already shifted.

"We are following Sydney, there is no question. We, as a firm, have consistently been up in the 90 to 95 per cent clearance rates. That shifted this weekend, dropping down to 75 per cent," Mr Staver said. "I genuinely believe this is a shift in our Melbourne market."

After enduring more than a year of COVID-affected rents, investors have listed their properties in droves, helping add to supply, Mr Staver said.

But the stricter stress test applied to borrowing had also brought buyer activity forward as buyers tried to avoid having to reapply for pre-approvals under the new rules, though it had also left them more discerning than ever before, he said.

"I've never known buyers to be as discerning as they are. If their expectations of price haven't been met by vendors, that explains the 25 per cent that is not selling.

"When a vendor has an overly ambitious price, buyers are just going to pass by their property.

"I'd be really surprised to see clearance rates going back into the 80-plus. I think the 70s are here to stay with this supply level."