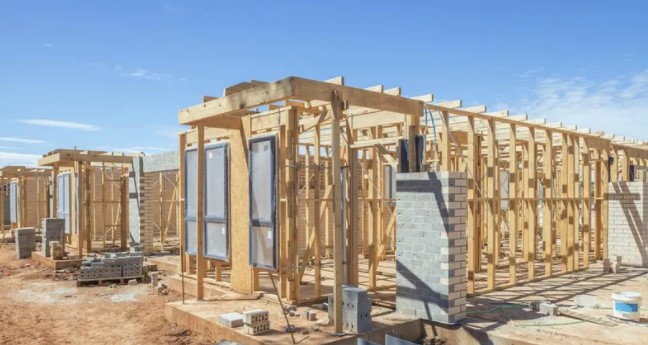 A number of major builders have gone bust in recent months despite a home construction boom.

Alongside a house price boom, Australia is in the midst of a homebuilding boom, with the Housing Industry of Australia expecting a near-record number of new homes will be built over the next 12 months.

But for many in the residential construction sector, it’s a profitless boom – and several major players have recently gone bust, with fears more will follow.

Brisbane-based giant Privium and Tasmanian-based Inside Out Construction have gone into voluntary administration, while ABD Group in Melbourne has been put into liquidation.

On the Sunshine Coast, BA Murphy Constructions has had their license suspended by the Queensland Building and Construction Commission after allegations it wasn’t paying sub-contractors

Why are construction companies folding?

A perfect storm of factors has been brewing for the better part of 2021, and now the rainy season has arrived.

Supply chain issues, with a shortage of building materials worldwide resulting from COVID-19 disruptions, coupled with natural disasters from freak storms to bushfires, have heaped pressure on builders.

Those shortages have led to prices rising exponentially, particularly for timber and steel.

On top of that, a labor shortage is making it difficult to find tradespeople, giving workers the power to command huge wages.

So, the overall cost of constructing a new home has been pushed up significantly.

Adding to this is the lengthy delays in actually getting the materials, which has led to some homes taking more than 12 months to be build, further adding to building companies’ costs.

With the majority of builders signing fixed price contracts with buyers, and the margin for escalating costs being inadequate, many are losing money on every single project.

It’s a big problem in exceptional circumstances like we’re seeing at the moment, said Russ Stephens, co-founder of the Association of Professional Builders.

“The average cost of a contract for a builder has gone up between 15% to 20% over the past six or seven months alone – and up to as much as 50% in some areas,” Mr Stephens said.

“But because they’ve already signed a fixed-price contract, they’re unable to recoup the costs from customers, which means they have to absorb it.

“They have a fixed income coming in, but they money going out is up.”

Scott Morrison’s HomeBuilder scheme has contributed to the crisis facing the construction sector, some experts believe.

Mr Stephens estimates some builders are losing about $40,000 on each job, and for those doing larger jobs, they’re more likely losing hundreds of thousands of dollars.

Peter Koulizos, Property Investment Professionals of Australia chairman, said the HomeBuilder grant, which offered up to $25,000 to eligible buyers signing a building contract from the middle of 2020 until March 2021 – a scheme designed to stimulate the economy following COVID – was the catalyst for the issues that now plague the building industry.

It led to a building boom by pushing demand up significantly, but with a supply shortage occurring at the same time, it created the “perfect storm”, Mr Koulizos said.

It’s just the tip of the iceberg, with more failures to come

The issues in the building industry will likely carry through until at least the end of 2022, Master Builders Queensland deputy CEO Paul Bidwell said.

“We think there will be more insolvencies, and the time we’re really concerned about is the first quarter of next year,” Mr Bidwell said.

Australia is in the midst of a residential construction boom, with a near-record number of new homes to be built in the next year.

Mr Stephens believes more than 60% of builders are currently losing money, with many failing to manage their finances properly.

“This is the tip of the iceberg at the moment – we think it’s going to get a lot worse in 2022 in terms of building company failures,” he said.

According to Mr Stephens, the problems in the industry need to be addressed openly and honestly, with financial education programs for builders needed to help reduce the number going bust.

“If we sweep it under the rug, it will be too late next year,” he said.

Builders need to understand where they are right now financially and where each jobs sits in terms of profitability, which will help with starting their next job and signing future contracts, Mr Stephens explains.

They should also be careful about signing contracts too far in advance, unless they factor in appropriate cost rises, he added.