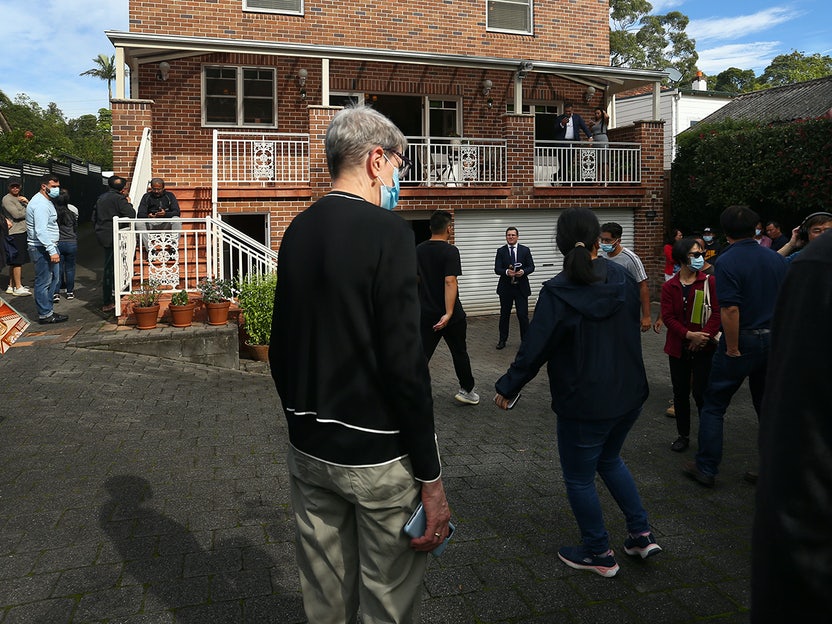 Australia’s red hot housing market is showing signs of cooling as prices in Melbourne fall for the first time in 14 months.

The housing market is showing signs of softening across Australia as buyers in Sydney and Melbourne grapple with an affordability crunch.

Australia’s housing market softened even further in December, according to new data released by CoreLogic on Tuesday, which showed Melbourne report its first price decline since October 2020, sliding 0.1%.

Meanwhile, Sydney also saw its first drop over the same period, recording an increase of just 0.3%, while Brisbane and Adelaide were the only two Australian capitals where there was no evidence that rising house prices would slow.

CoreLogic research director Tim Lawless said it’s likely that prices in Brisbane and Adelaide will continue to rise as they remain relatively affordable, and are maintaining higher levels of supply as cities across Queensland welcome scores of migrating professionals.

By comparison, he said, a barrage of listings in Sydney and Melbourne paired with higher deposits and slower income growth have put downward pressure on house prices in Australia’s two most-populated capital cities.

“A surge in freshly advertised listings through December has been a key factor in taking some heat out of the Melbourne and Sydney housing markets, along with some demand headwinds caused by significant affordability constraints and negative interstate migration,” Lawless said.

“We have seen this trend in previous growth cycles, where more expensive housing markets have shown greater levels of volatility,” Lawless said.

“Housing values tend to rise more through the upswing but record a larger decline through the down phase of the cycle,” he said.

Across the board, Australian house prices recorded a 1% increase through December, down on the 1.3% bump seen in November, ending the year 1.5 percentage points lower than the year’s 2.8% record growth rate in March.

According to CoreLogic, a two-speed market is emerging across state capitals, which has seen conditions in Brisbane and Adelaide gather pace as Sydney, Melbourne and even Perth begin to slow down.

One of the key drivers for slowing trends in Sydney and Melbourne, according to the data, can be explained by the growing prominence of deposit hurdles, while cooling in Perth has been chalked up to the shuttering of Western Australia’s state border, turning the screw on housing demand across the state.

In Brisbane and Adelaide, though, affordability has become less of a challenge as listing volumes continue on at low levels and buyer behavior is supporting healthy demand.

That demand was seen steadily climbing all throughout 2021, which Lawless said has been a major contributor rising house prices. Even as housing stock remained relatively low throughout the year, the total number of home sales in 2021 clocked in about 40% above the decade average.

CoreLogic estimated that there were approximately 653,000 house and unit settlements over the course of the calendar year — the highest number on record.

“Such a significant mismatch between available housing supply and the level of demand is a fundamental reason why housing prices have risen so sharply over the year,” Lawless said.

As stock levels normalize and affordability constraints along with tighter credit conditions drag down demand, it’s reasonable to expect growth conditions will be more subdued in 2022.”

In 2022, capital gains across the housing market could ease even further

During the closing months of 2021, house prices rose at the fastest rate of annual growth seen since the late 1980s. At the same time, wages and household incomes didn’t move.

The friction caused by rising house prices and stagnant wage growth built the housing market’s barrier to entry to new highs — and analysts at CoreLogic predict that affordability challenges will be a central theme over the next 12 months.

However, as was the case early in 2021, the uncertainty that has come to accompany emerging strains of COVID-19 will yet again have the attention of market analysts, who predict coronavirus could be a noteworthy wildcard in 2022.

“A return to restrictive policies, especially those that prohibit movements or home inspections would result in a new phase of temporary disruption to transaction activity,” Lawless said.

“However, such a scenario may also prolong expansive monetary policy and low interest rates, which helped sustain housing demand through 2021.

The Reserve Bank of Australia won’t have their first meeting back until February, when the Board is expected to announce that they have held the cash rate at 0.1% after opting to sit tight through the festive season.

The housing market, unsurprisingly, would be jolted by the rising cost of debt. However, Lawless said any further tightening could have the same effect.