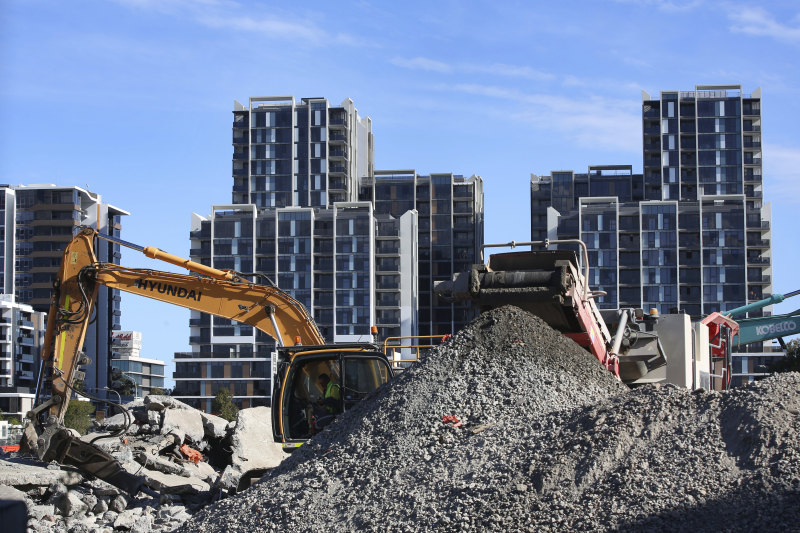 There has been a decline in apartment developments in Sydney.

Sydney is in the grip of a historic drop in new housing supply, driven by a collapse in apartment developments, which could exacerbate the city’s shortage and push up prices just as population growth is poised to increase post-pandemic.

An analysis of dwelling completions presented to a Property Council conference on Tuesday also warned that Sydney was failing to capitalize on huge transport infrastructure investment by building higher density developments near commuter hubs.

Apartment completions have nearly halved from their 2017-18 peak of 30,000, but free-standing houses bounced back strongly last financial year and now account for more than 40 per cent of Sydney’s new dwellings.

While some of the slowdown can be attributed to the pandemic, apartment approvals have been decreasing since 2016-17, when they peaked at 38,000. They are now 60 per cent of that level.

“We really are seeing a historic drop in supply,” said Chris O’Dell, director of consultancy GYDE and former director of housing and population at the Planning Department. “It’s a 30 per cent drop in three years. Sydney hasn’t seen that kind of drop in supply since the ’80s.”

The peak was driven by the delivery of four significant, high-density redevelopments around that period: Darling Square in central Sydney, Green Square to the south, North Ryde and Wentworth Point. Mr O’Dell pointed out some of those projects took more than a decade to come to fruition.

“We need to make the most of the enormous infrastructure spend that has happened and catalyze more [development] around those [corridors],” she told the Property Council’s residential outlook briefing.

The GSC has approved housing targets for each council as part of its plan to build 725,000 new homes across Greater Sydney by 2036. Analysis commissioned by the Property Council previously found only one council - the Hills Shire - was on track to meet its 2026 target, though this was disputed by the government.

Fairfield and Penrith councils are yet to endorse their local housing strategies, while Woollahra - which plans to build just 500 new homes by 2026 and a further 400 in the decade after - is yet to have its strategy approved by the government.

Outside Sydney, some regions were meeting or exceeding their targets, such as the Hunter and the Illawarra. But the Central Coast was struggling with a “really inadequate supply of viable greenfield land”, Mr. O’Dell said.

Commodity prices and labour shortages in the wake of COVID-19 have contributed to construction woes. “We need to bring that skilled labour back,” said Fabrizio Perilli, chief executive of developer TOGA.

While NSW’s population growth slowed to just 22,000 in 2020-21 - about the size of Goulburn - Mr O’Dell said the resumption of migration and international students now that borders had reopened would likely see that quickly return to 130,000 a year.

The pandemic had accelerated a building slump that was already underway, he said. “The slowdown was on before COVID,” he said. “We came off an enormous peak, so it was always going to drop. I think COVID probably sped it up a bit. The question is: when does that curve stop?”

The Planning Department said it had approved 31 of 33 local housing strategies in metropolitan Sydney, but councils themselves were responsible for monitoring their progress against targets.

“We recognize that housing affordability is at the forefront of everyone’s mind and the NSW government is exploring ways to help alleviate this pressure as a priority,” a spokeswoman said.